Even without Dobby and the rescues, it would be wild and crazy here, especially in April. The songbirds are singing, the hummingbirds have migrated from the feeders to the flowers blooming in the yard, and I listen for peeps that might mean an imperiled duckling. 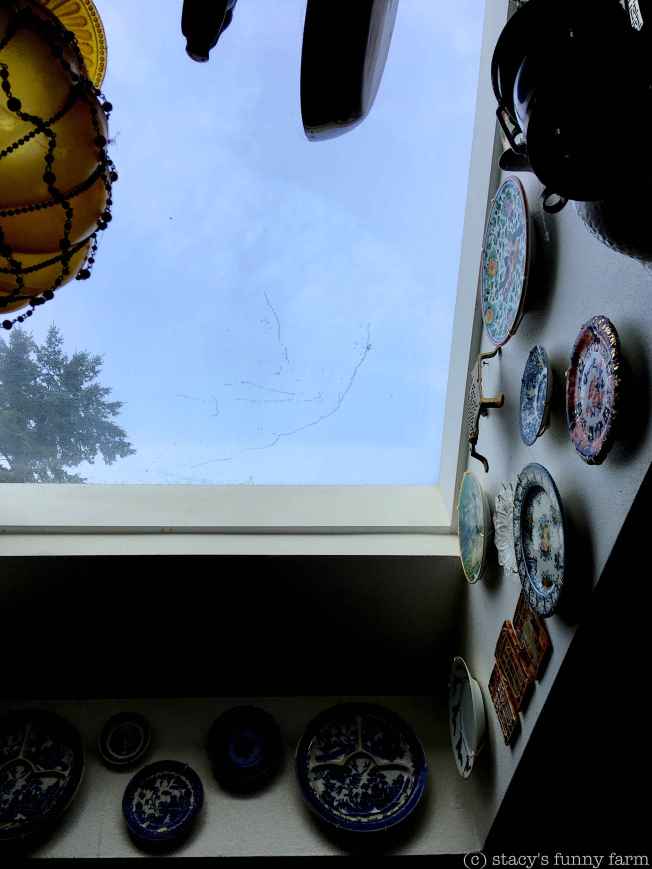 There are at least a couple hundred geese in this flock. They are probably Snow Geese on their way up to Mount Vernon.

Distant honking caused me to look up at the kitchen skylight in time to see a flock of geese flying back north. I have seen a few “V’s” fly by, but this is an entire flock. 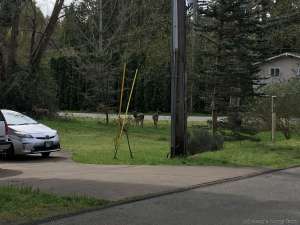 Click on the photo if you can’t see the three deer. Our World Famous Mailboxes are stage left, out of frame.

Half an hour later, my neighbor knocked on the door. (WOW! I have forgotten what 9 months pregnant looks like!) She saw three deer walk out of my yard, and knowing how wild it can be here, wanted to make certain they weren’t escapees of mine! (Note to self: invite her over, let her boys feed the guinea pigs, give her a tour and a dozen eggs.) The deer were down at the end of the street, and I’m sure we have all seen better deer photos than this, but after 18 years here, I am stunned at the idea of deer wandering through. Over the fences. Eating Dobby’s grass and maybe even his bamboo!

Not the boot print, silly! The deer hoof print. This is on a narrow Dobby-trail in the front yard.

Sure enough, deer hoof prints all over the yard. There are other prints, too, out at the street by the garbage cans. Who was this?

Guess now, and I’ll let you know who I think stood around here in the mud.

We have coyotes, raccoons, opossums, squirrels, songbirds, hawks, owls, herons, and six kinds of woodpeckers. And ducks. Mallards are common, but I have had a Wood Duck drop by in the winter. A Bald Eagle swooped through here a month ago. No Mountain Beavers yet, but I keep hoping. I think it’s too flat and wet here.

There were two aqua eggs in the nest when I checked. The duck nest is the brown swirl of junk, lower middle of photo.

This is a mallard nest by my front door. I watched her drop from the sky and scuttle into this nest. It looks the same whether or not she is in it, her camouflage is so perfect. She abandoned this nest, leaving two pretty blue eggs. She’s been hanging in my back yard for maybe 12 years now, before Dobby came. She’s brought her brood into the house, taking the front-door to kitchen route that Dobby craves when he begs by that door. Everyone knows that route exists, like the Northwest Passage, but only Mrs. Mallard has had the privilege of using it. No wonder Dobby is jealous!

This year, I can see her next door with her precious brood. You can count six in this photo. There used to be seven, and I chased “seven” back to her more than once when I found the little explorer in my creek. Alas, nature does not reward the babes who stray. No ducklings survived here last year, and neighbors later told me that Bald Eagles got them all. The angst can destroy you. Take a deep breath and do what you can, let the rest go. Yesterday she had only two ducklings. I’m afraid to look today.

Mr. Mallard is never far away.

I put out cracked corn: proper poultry food gets sour and moldy the moment it touches ground. Wild bird seed attracts “undesirables” and it is available in my back yard for “Ducks In The Know.” The food I put out is mostly for the momma ducks, anyway. The babies just mess around. They ate their proper baby duck food already. It’s called “duckweed.”

Western Redback Salamander (Plethodon vehiculum)? Can anyone confirm this?

I suppose they eat other stuff, too. Connor was here today and carefully moved some wood in the front yard. Sure enough, there was a salamander under it. In this neighborhood, life lurks in out-of-the-way corners, and you might as well anticipate it. Inches away, the Creature From the Black Lagoon watches us. 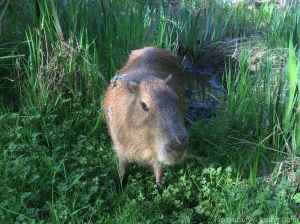 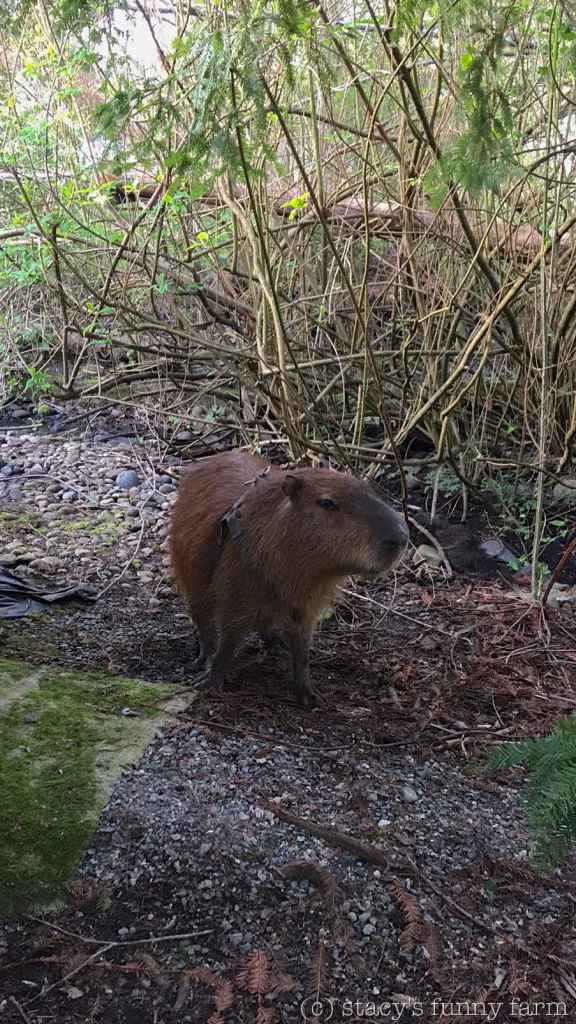 Instead of rolling in the mud, he traipsed through it and then led me back to the Duckling Viewing Area. He used to sit back there and gaze at the pond, but he has been too busy to do that lately.

Well, how about that! Mr. Opossum is at the Duckling Viewing Area. Harumph! Move along, dude! He skedaddled to the Opossum Highway on top of the fence, and headed toward the back yard. Terrific. All my hens and ducks are out, but Norman the Goose will watch out for them. I know this guy, anyway, and all he ever catches is eggs, empty cat food cans, and occasionally he massacres a discarded corn cob overnight.

Dobby and I checked on the ducks and still saw six ducklings. This momma Mallard now has two drakes watching over her and her brood. Whatever it takes, I don’t judge.

To tell you the truth, Mr. Opossum is too slow to catch a duckling. (Note woodpecker holes on the tree trunk.)

Mr. Opossum wasn’t easily deterred, and I saw him in the back yard a while later. He’s perched on Opossum Highway, but outside the aviary. There’s a bushy evergreen growing through the fence and it creates a nice little observation platform. I wonder how often he perches there, watching my flock. He’s going to be sad when he discovers a nasty wad of chickenwire jammed in there.

Those were my footprints out by the street.

Dobby is back inside the aviary, sitting in another lovely mudhole. So perfect.

Next, Dobby went into the hot tub to get clean, with a fan club cheering him on. It’s also slightly possible that they were waiting for him to get out so they could get in. 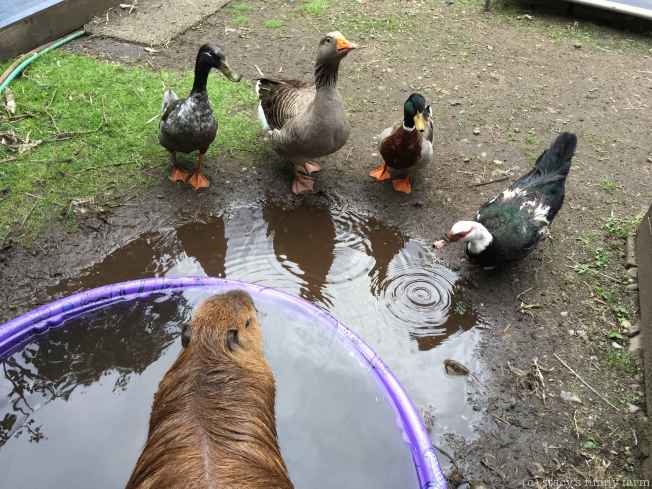 If you don’t get all the way in, and don’t scrub or use soap, bath results can vary.

Oh well, I guess he wasn’t through testing all of the Funny Farm mud holes. This one offers tender new raspberry sprouts. When he eats them, I don’t get raspberries later in the summer. That’s why I carefully fenced them off.

Wait! What about the hot tub? Don’t you want to go back in before you go into the kitchen? Please don’t shake! Dobby? At least it’s only mud this time. That’s how bad he is: I’m relieved that he’s only covered in mud. If you have to ask what’s worse, then you haven’t read his book! You can also follow him on his secret Facebook profile.

There’s a capybara underneath the patina.