No pet could ever replace Dobby, and his impact upon my life is immeasurable. Still, looking out at my front yard this past year has been heartbreaking. I couldn’t even step out there for the first six months after his passing. Now his pasture is so overgrown I can’t walk across it. Everyone has been hoping I would get another capybara, but the snow last winter was so deep and persistent, poor tropical Dobby would have spent a month cooped up in my kitchen. It’s time for a change of critters.

Loaded into the car and ready to go! These sheep are small!

The Bartender and I drove to Walla Walla Washington to pick up our Shetland sheep. The boys were born in April, so they aren’t quite full grown and fit nicely in this extra-large dog crate, the biggest one that fit into the back of my Subaru Forester. They came from a small farm where they were already spoiled, friendly little guys, but it is only practical to keep a couple of rams. They were happy to see Charlie and Hamish (hay-mish) coming to live where they will get lots of attention.

Charlie takes his half of the crate in the middle.

I have a lot to learn about sheep, so feel free to correct me and I’ll edit this post. Shetland sheep are heritage sheep and, as The Bartender put it, “not ruined yet.” They are small, the rams getting to about 120# (55kg), so about the same size as Dobby. Tiny Shetland sheep are not worth raising to eat and so are primarily raised for their wool. That’s why they are popular with knitters and weavers. They shed their wool so you can pick it off which is called “rooing.” Most sheep have been bred to be sheared, leaving them dependent upon humans. Check out this hilarious sheep named Shrek. 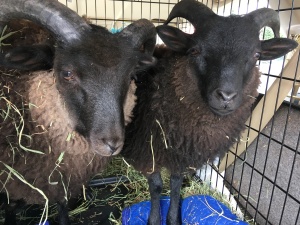 They come from the Shetland Islands, adrift out there between Scotland and Norway. Seattle winters will not be a problem, as our climate is so similar. They are more like donkeys than horses, in that they can survive on low quality forage. Let’s hope that they like bamboo! (It has taken over the front yard since Dobby left us.) Now, check out those little horns. As they mature, the horns should curl right around, giving them that classic ram look, like the truck logo. For now, those horns can get caught in anything they can stick their head into. Hamish demonstrated that the first day by getting his head stuck in the back of a chair, then dragging it across the deck. The chair has been removed and so have the tomato cages. Sheesh. 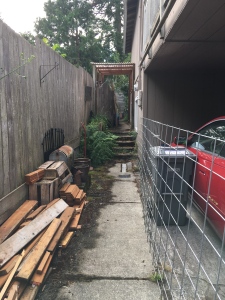 The chute between the back of the car and the back yard, their new home.

It was a five hour drive but the boys were champs. Charlie ate orchard grass the entire time, while Hamish hunkered down, not quite as cavalier as his buddy, but stoic. Dobby was a tame wild animal, but these guys are not quite (yet) tame domestic animals. They don’t know us or trust us, so we knew we had one chance to get them safely from the car to the back yard. If they got into the street, we were doomed. We used cattle fencing to form a chute, opened both gates to the yard (I am double-gated for security) and opened up their crate. And they refused to come out of the car.

The Bartender rattles a sack of grain, as if we would give them that whole bag to eat.

What would I do without The Bartender? He reached in, grabbed Charlie the way we saw the farmer do it, and set him down. (Today, four days later, he confessed that Charlie had nipped him on the shoulder, and he was glad he had a heavy shirt on.) This is why you get two sheep: Hamish immediately hopped out after him. They headed straight down the chute as if it had suction. They stopped for a quick snack at the big green fern you can see mid-photo. A bit of a nudge and they continued on, around the graveyard, past the apple tree and all the way to the aviary!

Nope, sorry boys, you’re not going in there. Not today, anyway.

When they realized they had reached the end of the road, they turned around and started eating grass. They yanked the leaves off the low hanging branches of the apple tree, causing a cascade of apples onto the ground. They checked out the deck with its intriguing feed bowls. Oh, wait, those are my flower pots! And generally poked their noses into anything and everything, including the dish of cracked corn the ducks didn’t eat. 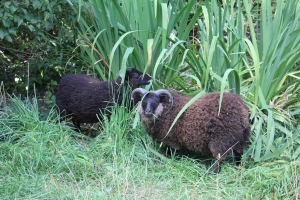 Charlie and Hamish check out the grass and my lovely raspberry plants.

I was especially pleased that they readily went in to investigate Dobby’s old pen, recently renovated to accommodate ruminants. They went in and out half a dozen times that first afternoon. It was already late afternoon, and new residents at the Funny Farm usually have all day to get accustomed to their new home before nightfall. Their obvious approval was a big relief for me. 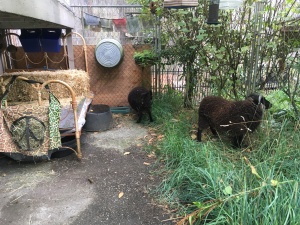 The night pen met their expectations.

Because they won’t need a heater, I moved the bed away from the electrical outlet, which left more space near the gate. Dobby’s old bed gives them a raised platform off the cold ground in the winter. I put up a plywood privacy screen/windbreak, and broke open a bale of straw for bedding. I cleaned up a couple of hay feeders, two sheep, you know? They go back and forth between them, jockeying for position at the same rack. Of course.

They do everything together. I have only seen them apart a couple of times.

In this damp climate, hay gets moldy fast, so I store it in the bins you can see lined up along the wall. Alfalfa is damp and goes bad especially fast, so I need to figure out another option for that. In that chute photo, you can just make out the first gate at the top of the stairs by the fern. Because of the fiberglass roof, that bicycle storage area heats up nicely in any kind of weather. I’ll find a way to store it in there. Selling Dobby’s old swimming pool would open up the perfect amount of space. Anyone need a slightly used capybara swimming pool? 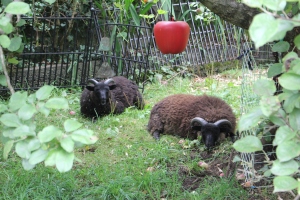 They love hanging out in the shade of the apple tree.

Meanwhile, Charlie and Hamish are back under the apple tree, chewing cud. Charlie is very dark brown, nearly black and should stay black. Hamish has gray cheeks and his fleece will probably fade to that color. Amazingly, I have a spinning wheel that belonged to my sister. (Who wouldn’t want a spinning wheel taking up a corner of their living room?) The Bartender and I will be going to the fair this year to talk to the sheep barn folks and hopefully get a two-bit carding and spinning lesson.

Charlie and Hamish finish off the Violas in the pot on the deck.

Most all of my equipment is suitable for sheep, so I don’t have to buy much. I decided to look into a shepherd’s crook, though, to complete my Bo-Peep look. After a fair amount of research, I discovered that Martha Stewart, of all people, has sheep and is fairly knowledgeable about them. Who knew? At first I was annoyed that she had beat me to “sheep” but then I realized that if Martha Stewart can do it, surely I can do it, too. I bet she’s never had a capybara in her kitchen. So there.

The Bartender called it: he’ll have to re-install the plexiglas door protector.

The Bartender asked whether he needed to re-install the plexiglas over the lower part of the kitchen door. Nah, I said, they’re just looking in. Four days later I hear nibbling at the door. As Briana quipped, “Double-Dobby!” In the photo above, the chairs had been removed. They had not yet uprooted the pineapple plant on the bottom shelf. I found it on the deck three times before I moved it up. I’m a slow learner.

From the very first night, at the end of the day they have moseyed to their night pen and settled down. All I have to do is close the gate. It has been less than a week, and it seems too easy. I plan to train them to a halter, and get onto a scale. I’ll get them used to visitors and figure out what treats they like. For now, I am making sure they know their names, as in “Not for Charlie!” and “Not for Hamish!”

P.S. The Bartender and I returned tonight from a sudden trip to the vet. Hamish had, ahem, “Manhood Issues.” He should be fine, but it was scary. On the other hand, now we know where the back entrance to the vet clinic is, and we have met their new vet! And I get to give Hamish his next round of antibiotics (via injection) on Sunday! Oh frabjous day!