It’s a great big Jacuzzi tub, so enormous that it drains the water heater to fill it. From the moment you turn off the faucet, that water begins to cool. About three minutes after you get in and get comfortable, the water temperature drops to a discernible chill. That’s when you realize that a hot shower would have been more effective. The kids piled a few dozen friends in there when we first moved in, and then it sat empty and unused for years, in my mind, begging for turtles. 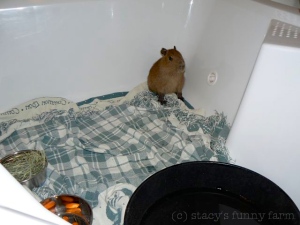 Dobby’s first day home was full of doubt. “Why am I in the bathtub? Do I have B.O.?”

It was the ideal pen for Baby Dobby. He didn’t even fill a corner when he first came home. 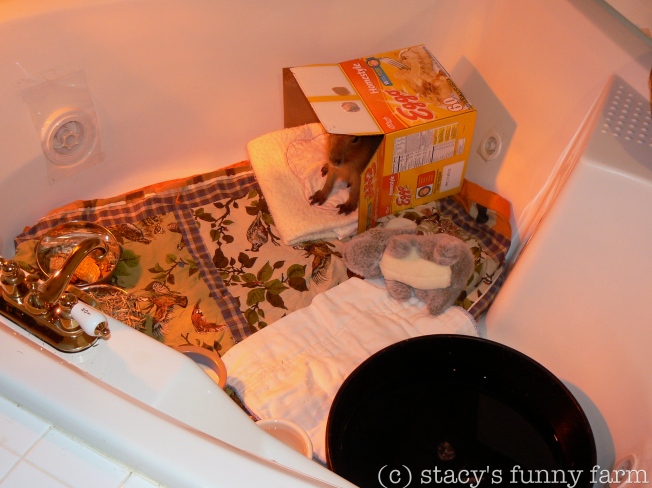 EGGO Waffle box for scale. His potty bowl looks like a swimming pool.

I added a heat lamp and a waffle box cave, a stuffed rabbit, and he stayed in there for a couple of weeks. He nearly died of pneumonia during that first month, and then liver failure. 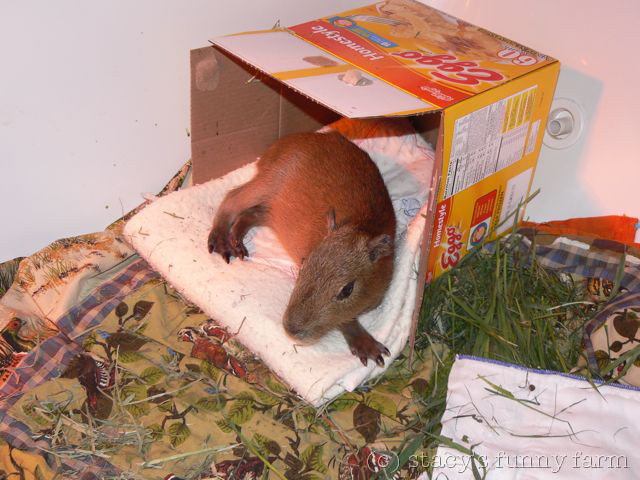 When I look back on it, I am amazed he didn’t leap out of there on his first day. That should have been my clue that he was sick.

I was still working, and baby Dobby was home with The Bartender when he learned to jump out, and life became much more interesting. A duck or two recuperated in the bathtub, guinea pigs spent “floor time” in there, but nobody “lived” in there until Turkey the duckling came. 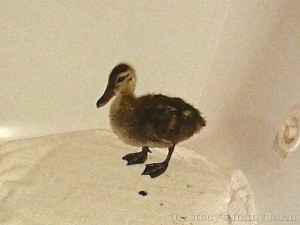 From the wild, to a turkey coop, to a suburban bathtub. Turkey the duck settled right in.

Turkey was a little homeless mallard duckling, the last survivor of a jaywalking tragedy out on Hwy 9. 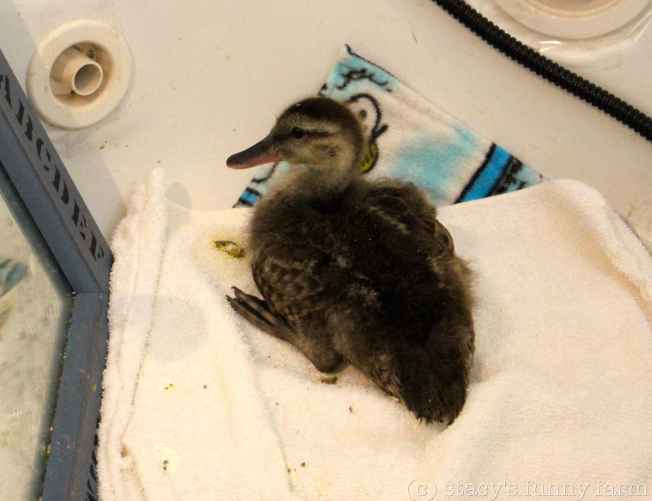 Turkey grew up big and strong and joined the wild flock in the back yard. Sometimes I think I can spot her among the rabble, but honestly, it’s hard to tell mallards apart by sight. Their behavior is much more distinctive, and sometimes one will approach me with confidence, while the others shy away. That’s my Turkey. 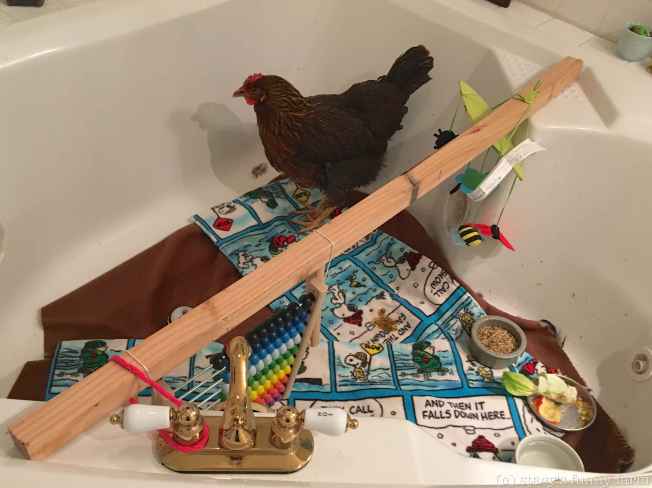 Still missing spunky Conchita. She and I had long conversations.

If you are not new to this farm blog, you will know the story of Conchita and her broken leg. She took up residence in the bathtub for a couple weeks, moved out to the infirmary when the cast came off. Then she moved back in for a couple weeks of R&R after her final surgery. It was lots of fun to have her indoors, until she started to molt and feathers went everywhere. 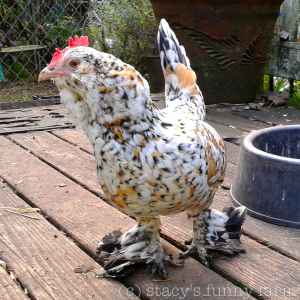 I have always joked that Princess Blur would make the perfect “House Chicken.” She’s so petite, and anyway, she never really took to living outdoors with (Gasp!) poultry. They are so common. 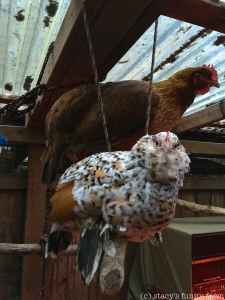 Who are you looking at?

When I left for Texas in mid-October, Princess was resigned to life outdoors, and roosted high on a perch with Adelita each night. The Bartender phoned me a couple days after I took this photo and said that Princess was not walking around. She was hunkered down on the ground, next to the fence, and not acting her usual prissy self. 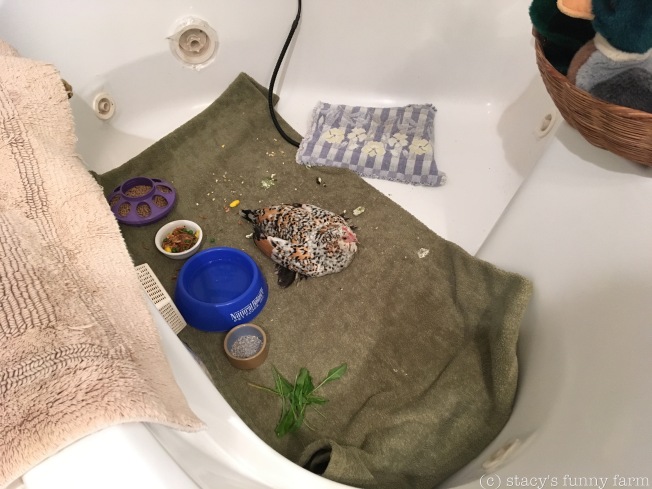 The Bartender took her to the vet who diagnosed a heart murmur, and set her up in the bathtub. He gave her a soft blanket, food, water, lots of treats (too many!) and a heated pad. 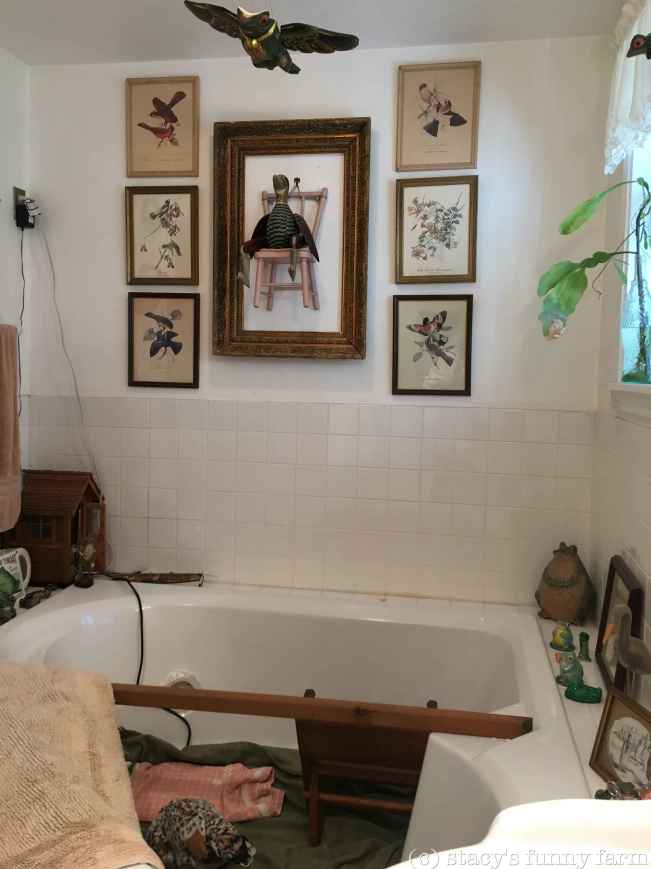 It isn’t your usual bathroom décor. The theme is “frogs,” though there are several ducks strewn about for comic relief.

At this point, you might think that this is an out-of-the-way bathroom, maybe one that my grown kids don’t use any more. Heavens no, this is MY bathroom. The master bathroom, the one off my bedroom. The one with the frog collection. The one I use all day and all night. I now brush my teeth with a chicken watching.

A while back, I had a hen named Lula who needed pain meds once a day. She endured a syringe of Metacam down her throat each morning. For two years. Conchita took a variety of medications for pain and infection during her convalescence. She tolerated a couple tablets shoved down her throat at intervals throughout the day.

Now I have a teeny tiny hen who needs meds twice a day. When I picked up the prescription, I was perplexed to see “1/3 of a tablet twice a day.” The pharmacist dully calculated the dose without considering the impossibility of splitting a tiny tablet into thirds. After a conference with the veterinarian, they reluctantly agreed to 1/4 of a tablet. Princess is so puny, it isn’t easy to hold her tightly enough to stuff that fractional tablet down her throat, but I managed it. It wasn’t on the floor or on my lap, so it must have gone in. The next time, she was ready to fight me. 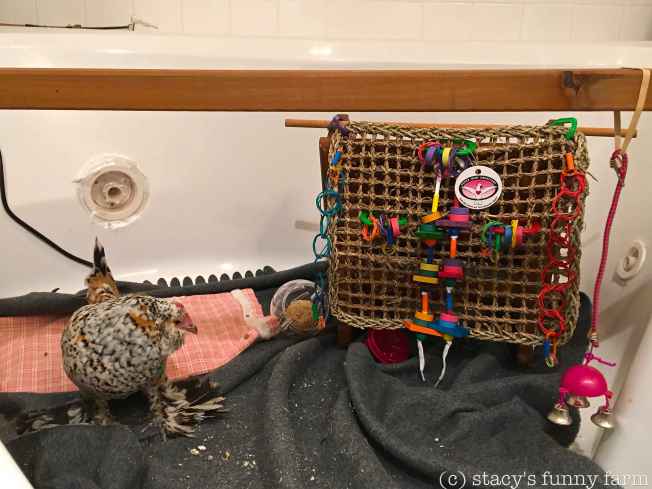 “Look at my new toys!” She has a woven wall of toys to peck at, and a “Ball O’ Bugs” in a plastic dispenser to keep her busy.

“Okay, dammit, here!” I held out the tiny pill on the palm of my hand and she pecked it up and swallowed it, turning her head to me afterward as if to say “That’s how it’s done, stupid!” She has pecked every pill from my hand ever since. 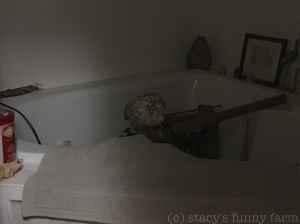 And so little Princess Blur spends her days in the bathtub. I take her out in the afternoon to participate in Garden Party with the flock. They eat greens, peck at bugs, cluck at each other, and then she comes back in to roost on the perch in the bathtub. It’s working out for both of us, but I am hoping that this medicine will fix her up so she can go back outdoors with the other hens. It’s sweet to have a little hen indoors, but honestly, if I discovered her wandering around the living room, I would be ecstatic!