Dobby’s diving video is featured on Bored Panda! He also made the front page of reddit yesterday! Woohoo! It isn’t quite the same as The New Yorker magazine announcing his candidacy for the 2016 presidential contest, but it is still pretty cool! That didn’t go so well, anyway.

A little bit of the Amazon River, right here in my backyard, complete with indigenous species!

Stacy’s Funny Farm is a non-profit pet sanctuary. You can read more about it here.

Winter is here and it’s awful. Those of you who live in a cold climate know about hauling water out to the flock in the morning. You know about “ice management.” That’s when you toss the ice out of the frozen waterers strategically, so that the shards of ice don’t create a hazard if they don’t melt within the next couple of days. You know about hoarfrost, and dig out around your gates so it can’t build up and shut you out of your pens. Winter water bowls are re-stacked so they aren’t frozen together when you need them. Food and meds are brought indoors so they don’t freeze. Ugh.

Dobby sleeps indoors, in all his glory, because frozen blankets are a drag. I have to wear my mud boots to walk through his section of the kitchen, because, you know, he’s “living” in there. In his seventh winter, Dobby takes sleeping indoors in stride. He even “goes” outside during the day. Sometimes. He has also learned to tolerate staying indoors, and not go in and out the door all night, leaving it ajar in twenty degree weather. Right next to the bird cages. He did decide to go out at 3AM last night. It was 28 degrees out there, his bedroom heater usually keeps it 10 degrees higher, so 38, and the blankets were probably pliable. I still had to go down and shut the door behind him, bird cages. Go back to bed and fall asleep, fretting. If Dobby wants to go out, there’s no keeping him in. He eats the door jamb trying to get out. Another response to the question “It’s kind of like having a big dog, right?” No. It’s not.

For those of you who continue to ask, “Why capybara?” I offer this cartoon. I learned to walk by dragging a hamster cage around for balance. That means that this little joke is really the story of my life. It doesn’t explain the ducks, though.

Vinny performs the Donkey Honk, a drake display move. Ping is not impressed.

Most freezing nights, the ducks keep their water open by swimming in it and dabbling in it. That means there is always drinking water for the hens and cats, too. It was iced over this morning, a thin sheet easily poked, one drinking hole still open, so they are doing a good job.

The doves sit high and dry in their separate pen.

The doves are captive, though, and can’t get to the “dabble-hole.” I take out gallons of hot water to unfreeze their waterer. They have a bathing dish of ice, and hop right into the warm bath water I take out in the morning.

Beverly on the first day, contemplating her sudden loss of freedom.

Beverly is in jail, and has to keep her own dabble hole open. She’s brand new, rescued by a human Bev (the name is a coincidence) who befriended her at a nearby park. Muscovy ducks are from South America, not native here, so she’s probably an escaped pet. They aren’t as cold-tolerant as our indigenous ducks. Bev was able to pick her up and bring her to me, verifying her tameness, and I easily nabbed her for wing clipping. Now that she’s safe, we don’t want her flying away.

She spent a few days in quarantine, ye olde bully pen. She was desperate to join the flock, though, and looks very happy today, her first day mingling with the general population. Norman isn’t letting her get too close, but no one else seems to mind her. 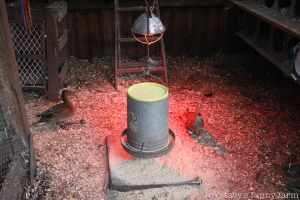 There are way too many Mallards, and when I open the gate in the afternoon for the Garden Party, they make a beeline for the feeder.

The photo above should be a video. Norman the flock Manager, is at the back, beyond the gate, a pale blob above and to the right of Dobby’s hanging yellow and green soccer ball. He is marching toward us, honking, and all of these mallards, 17 I think, marched out in front of him. He chased them away from his feeder! Go, Norman! Geese are so cool.

I was so pleased that I gave in and treated them to cracked corn out in the yard. That’s Carmen Miranda facing me, madder than heck at me for giving them HER corn. Note the stool on Dobby’s swimming pool steps, which are falling down in slow motion as they rot. They usually last a year, these were new late last summer.

The mallards left, and my little flock finally enjoyed their treat of cracked corn. 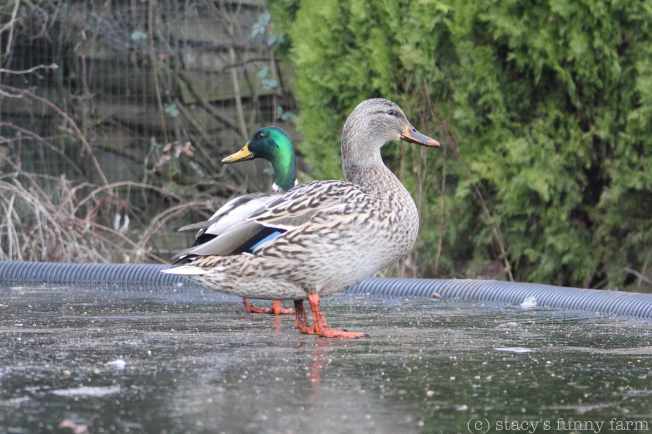 Mr. and Ms. Mallard, posing after a synchronized skating exhibition. She’s the one who brought her children to the front door and then through the house to the back yard last spring.

Remember the stool on the swimming pool steps? This is another reason why it is there. Dobby isn’t doing much swimming these days, and he probably can’t mount those raunchy bales, but he won’t climb past the stool. These are the resident Mallards, the ones who have been hanging out here since before Dobby got here. I suspect that the unruly mallard crowd is their offspring.

Eartha, Windy, and Frieda are my newest hens. Frieda follows me around like I’m a busted feed bag. 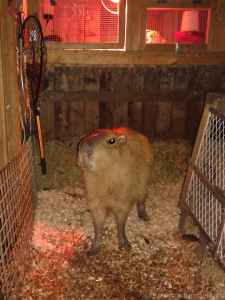 Dobby loves the barn. Sometimes he spends the morning out there, bothering everyone and eating their food.

I hate heat lamps, but this year I’ve got three out there, plus some heated pads for the tomcats, and of course one for Sir Dobbykins. He loves the barn. That’s the infirmary behind him. Lula is in there, but the door is open so that her companion, the inimitable Princess Blur, can come and go as she pleases. 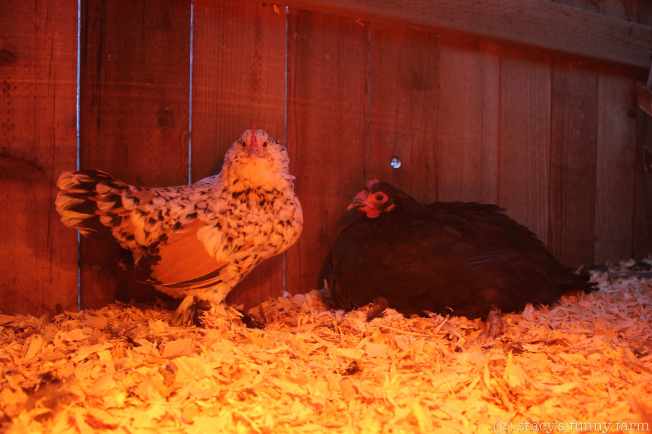 A couple days ago Princess did too much going. She was missing when I went out in the morning. Blaming myself, I figured I had missed her at the nightly lockup. I walked the neighborhood. I put a notice on Next Door. I drove the neighborhood. I knocked on doors. And that afternoon when I went to open the gate to let everyone out for Garden Party, guess who was first to run OUT the gate? Today I discovered she has skritched out a hollow between the barn wall and a bale of straw. She can really hunker down in there. She’s so bad.

Jello, Conchita, and Adelita on the roost. Princess Blur, in the background for once.

This was just before dusk, and the hens were ready for bed. These girls have been here a couple of years. 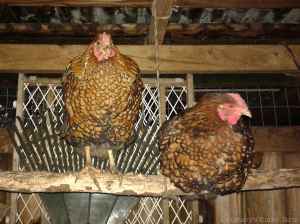 Here are the three new hens. Hmmm. They are finally settling into the evening routine. Where’s Frieda? 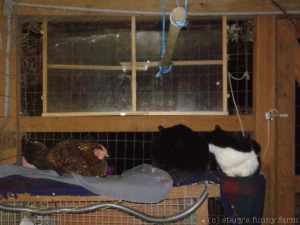 Frieda sleeps with the cats. Whatever. They aren’t as excited about it as she is. 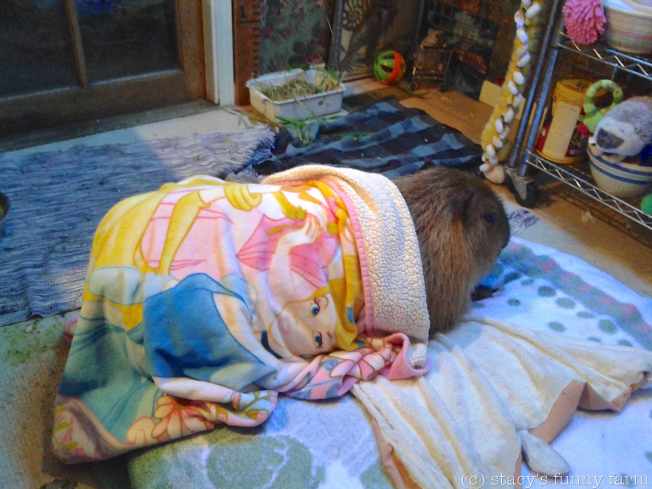 Bedtime for The Dobster. He usually sleeps outside, but when he’s indoors, he likes his bed, his white rabbit rug, and his pink princess blankie. Goodnight, Dobby Boy. 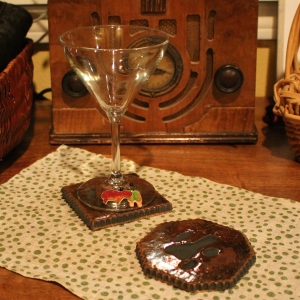 A very wonderful friend created and donated these tiles to the Funny Farm! They are raku fired ceramic tiles, backed with cork so they may be used as coasters. They feature the footprint of Caplin Rous, the World’s Most Famous Capybara! He was also Dobby’s big brother.

The glaze has a coppery iridescent sheen that doesn’t photograph to advantage because it changes from different angles. Right now they are mine, all mine, but I should probably sell them. They are available at Georgia Dee’s Gift Shop. 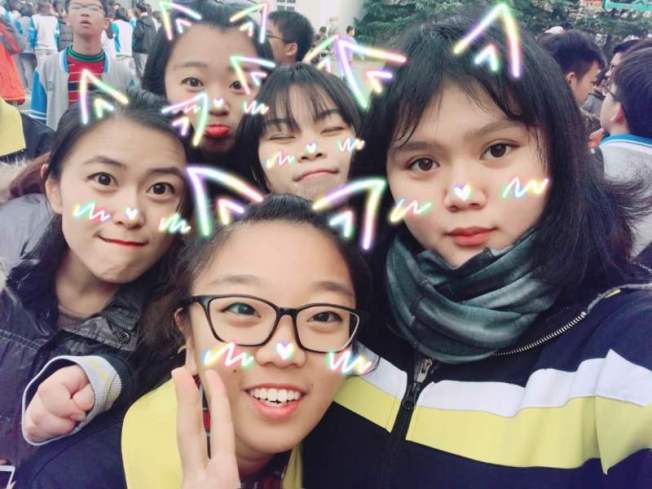 I will be incommunicado for about a week at the end/beginning of the year. My son is teaching at a high school in Shanghai, China and I can’t pass up the opportunity to visit. Don’t worry, The Bartender is gamely staying behind to care for Prince Dobalob and his subjects!