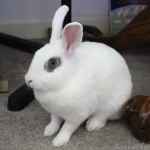 There will be more than one blog topic generated this week, but I will be lucky if I manage to write up even one. First, this is the worst trip to Florida I’ve ever taken, but the Seattle weather here at home is cooperating and we’re going to try a couple local Cuban restaurants this week and pretend we are in Hollywood Beach. My mint has enough tender new foliage for mojitos, we have stocked up on rum, and The Bartender is doing his best to take our minds off the unexpectedly aborted vacation. This is the stay-cation, classic version, and it is nice to have a week off my grueling 8.75 hour a week work schedule.

My little turtle, Quasimodo, emerged early in spring to say goodbye, I guess. He was never quite right, as you can tell from his name, but we had six nice years together. Doctor Pepper inherits his portion of the tank, and I hope he overcomes his extreme shyness the way Quasi eventually did. They rarely played “Turtle Pile” so I don’t think Doc had enough emotional attachment to feel grief, but animals are unpredictable that way.

Lula the hen still receives her daily pain meds, but has had a couple setbacks in spite of it. She has walked stiff-legged for about a year, but recently added a stanky leg flourish to her amble. On sunny days, I bring her out to the yard to keep Dobby company. It also prevents my crazier hens from pecking at her. 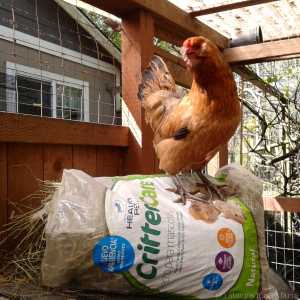 The bully pen has only three drakes this year, but one more has been “asking for it.” Romeo, Shamrock, and Emilio beg to attend the Garden Party every afternoon, but they are tricksters and I refuse to fall for their “Poor Me!” act. Tony, Vinny, and Sal have managed to retain their territory and it is refreshing to see them work together as a team. The twins Boondock and Boxcar are an even match to the trio, but one of them is a meany. Or maybe they both are, taking turns with sneak attacks. Because they work independently, Norman the Flock Manager is usually able to settle the disputes. 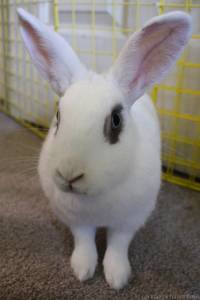 The big news is very rabbity. Honey Bunny, my foster, has been surrendered to me. I just scheduled her to be spayed next week and then she will be available for adoption. It’s breaking my heart because she has been here since December and she is the best pet rabbit I have ever had, except maybe for Wiley. But he was a garden rabbit. Honey has taken over the guinea pig room. Sadly, she is much more fun than my own rabbit, Fat Bonnie. 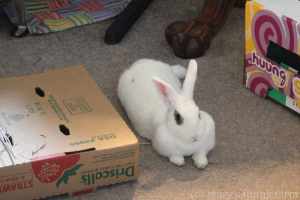 Fat Bonnie doesn’t move. She sits, hunkered down in unjustified fear. A gorgeous mini-rex, “black otter” in color, she is the softest rabbit I have ever had. Too bad she hates to be touched. She doesn’t tolerate much attention of any kind, come to think of it. She loved Wiley Wabbit so much that in a jealous rage she tried to kill her sister, Helen. Fat Bonnie bit her and drove her far under the deck where I found her two days later, scared, hungry, and dehydrated. So I don’t trust Fat Bonnie with other female rabbits and she has never met Honey. They are aware of each other, but live in different areas of the house.

Run, Fat Bonnie, run away! Quick, get under the shelves!

Every night, The Bartender cleans and sets up Dobby’s kitchen area for her, and Fat Bonnie’s door is opened so she can scamper and run and explore and browse and interact with us. And every night we encourage and beckon and cajole and beg her to leave her pen and find the salad waiting for her around the corner. And every night (for eight months now) we end up pushing and nudging and shooing and sometimes I even just carry her around that corner to her evening play area. And there she sits all night until it is time to go back to her pen. She’ll emerge for a treat tossed her way, but mostly she’ll retreat behind the door at a sudden noise or activity in the kitchen. Like someone opening the refrigerator door. Is she the only pet on earth who is scared of that sound? The guinea pigs are down the hall wheeking, and Fat Bonnie is quivering under the shelves.

Honey is probably a Hotot.

I can’t really keep both rabbits. If they could live together or even if they would play together nicely, I would keep them both. I would prefer to find a new home for finicky Fat Bonnie, but it would be a hard sell. So I will be re-homing Honey Bunny, the better bunny. 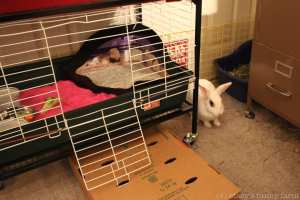 Friendly Honey Bunny runs to EVERYONE for petting and attention. When I step into her area, she gets the zoomies and rips around the room in big circles, next around my legs a couple times, then the room for a few more circuits before she settles down for some attention. Toss her some lettuce and she’ll ignore it, preferring to come over for a pet. I had never seen a bunny who flopped her ears so much, and thought she had mites. Turns out it is a Happy Thing. (Fat Bonnie doesn’t do it.) 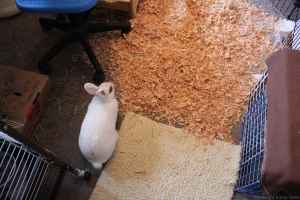 She hops readily into her cage at bedtime, but is perfectly well behaved out of it during the day. Well, except for the time she hopped up to the bookcase and broke a lamp. Or maybe that time she got behind the bunny barrier and ate her way through the guinea pig hay bags. Or when she opened the bag of shavings and decorated the room, or chewed a wire, or pulled a stack of towels through the bunny barrier. Or when she sticks her head through the gate to the hall and chews the edge of the hall runner. 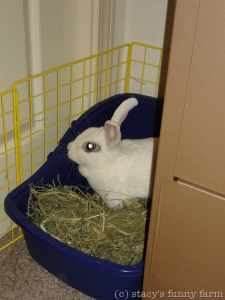 She has made a couple nests. She has an active litter box in her cage, and another in the corner of her room that she doesn’t use. Twice she has pulled fur and made a nest in the clean corner box. A few days ago, I saw her pulling fur again and looked in the box. She had dragged a blanket in there and two little stuffed animals- the monkey and the hamster! Her babies. She knew that it would be wrong to include the stuffed banana toy. 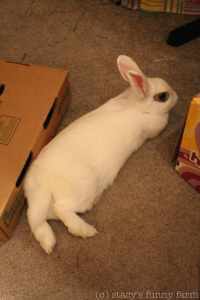 So, little Honey is available. Let me know if you are interested! 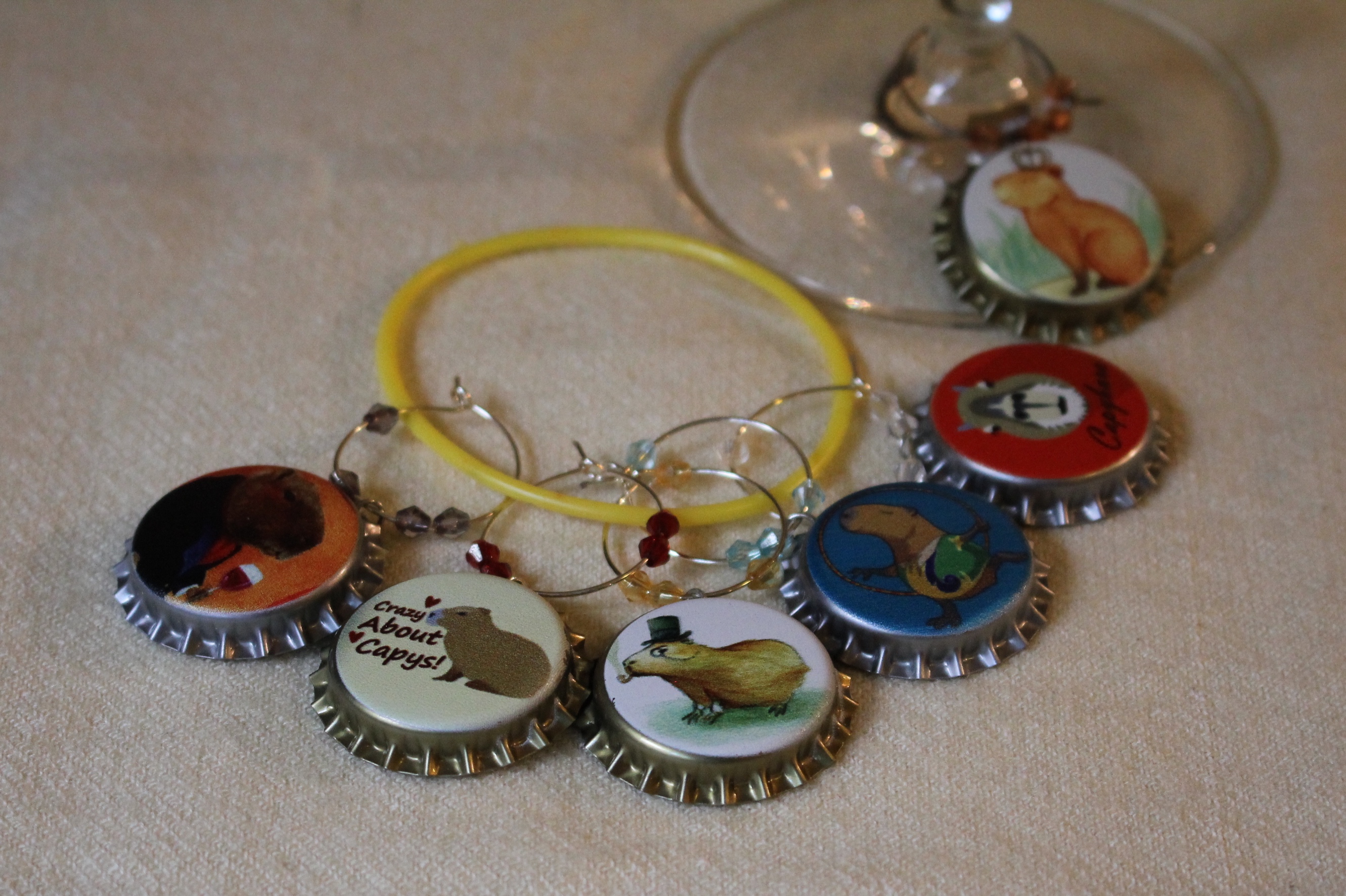