We always hope that rescue animals will move on to new homes once they are rehabilitated. Handicapped or chronically ill animals are harder to place, though, and that is why there are sanctuaries. These pets often have a shorter life span, but like all pets, they eventually grow old and then they die. Those of us who provide sanctuary know this, but it isn’t any easier for us when we lose these pets.

Ducks and Clucks is a rescue and sanctuary that used to be in Seattle but is now in Salt Lake City. There was a tragic loss there yesterday, but I thought I would first pass along this story about Lester Leroy, who also deserves to be remembered. I’m just going to show you a couple photos I stole from her, but you really should follow this link to Tiffany’s actual story.

Lester Leroy got around pretty well after physical therapy. He came into rescue with an infected leg.

He managed to attract the attention of another handicapped duck named Danny girl. What a cute couple!

Danny girl and Lester Leroy both needed help in and out of their pool. Not a big problem for a first class care facility.

As Lester aged, the problems would come and go, but mostly he was happy to spend quiet days with Danny girl. 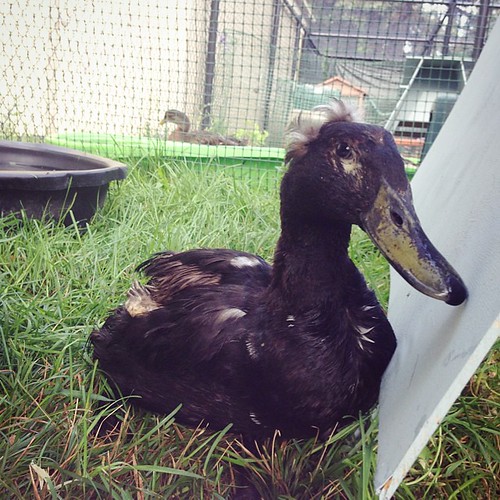 Lester Leroy has left the room, but his story is a reminder that there are people who care, even about little lame ducks. That’s kind of nice, isn’t it?

All photos by Tiffany Young, Ducks and Clucks.

Dobby the Capybara has been asking for it- so I let him write another blog. I told him he had to write a little bit about the Funny Farm and he protested, but finally agreed to write a bit about the ducks. Sure saved me some time! Here’s what he wrote:

Let’s take a walk out to the aviary.

Lula the hen, and Winky the Muscovy duck share a nest.

Look at these silly girls! They are sitting on . . . a nest. No eggs, just a nest. Lula gets hauled out of there to get her medicine every day and Winky complains about nothing. Personally, I think they are just lazy.

Our other Muscovy duck, Carmen Miranda, has laid eggs in several places so far, but her newest place is UNDERNEATH this old storage unit, in a hole. She can get way under there, which makes it hard to know if she’s even there. Does she think she’s a badger? I bet she’ll have that wood dragged away from her entrance by this afternoon.

Every year our drakes bully each other. We usually have to separate them, but this year, Sal is trying out a new strategy. This is a brush pile over an old stump, and he perches up there. Vinny and Tony hang out up there, too and the other ducks don’t bother them.

Old Fabio (he’s 9) gets bullied but he has two buddies who stand up for him. They have claimed the bully pen area and everybody leaves them alone. Romeo the Muscovy Drake doesn’t seem to be as dedicated to murdering Norman the goose this season, and everything is fairly orderly out there this year.

Penguin is the black one.

This is our very sad story. Our oldest hen, Penguin, was found dead at the first of the month. This photo was taken the day before, and she looks fabulous, doesn’t she? She had a slow winter but had been laying eggs, so we suspect Fowl Play, but it really doesn’t matter, now. She was a good hen. Now we are left with Lula the sick one, Jello the naughty one, and Madonna the intellectually challenged one.

The ducklings have dispersed but we still see this little group. The six are now five, but they are fat and happy.

And that’s what he wrote about the Funny Farm. Personally, I think he should have been more respectful of his friend, Penguin the hen. She was nearly as old as Dobby, and I know he was especially fond of her.

The big news wasn’t really about the Funny Farm at all. Dobby has every right to be proud, though, because he made the cover of Guinea Pig Magazine! An exceptionally fine publication, he was featured in a magnificent six page section of the magazine! You can order your very own copy of the magazine – or subscribe! – here!

If you want to read Dobby’s blog, here is the link: